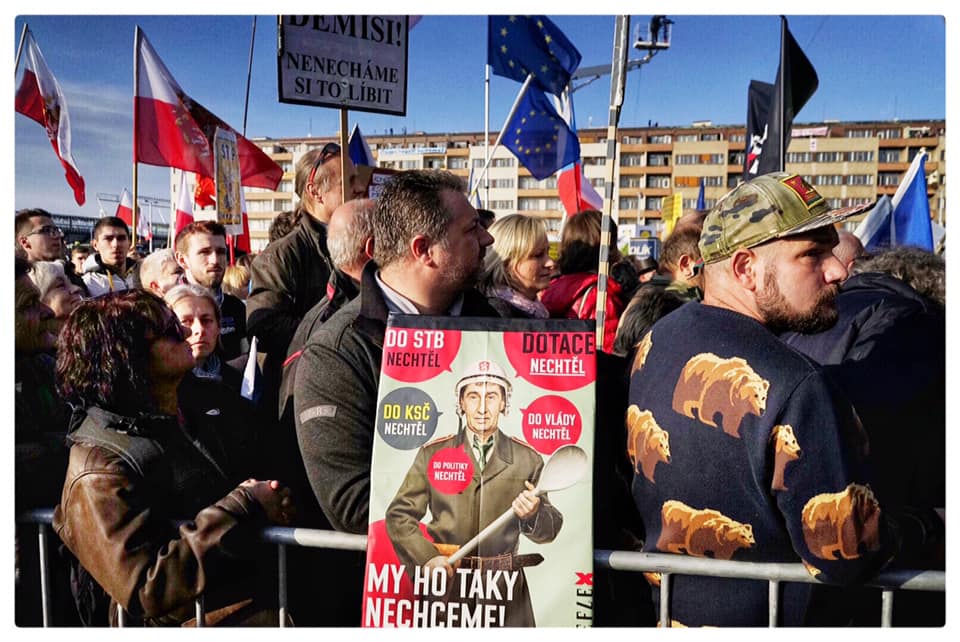 Central Europe’s political arena has been a lively place since our last overview.

Austria re-elected Sebastian Kurz and his People’s Party in an election triggered by the collapse of his last government amid a summer scandal surrounding then coalition partner, the far-right Freedom Party.  The Green Party’s share of the vote soared, the Freedom Party’s shrank.  Politico has the details.

Bulgaria held its second and final round of voting in municipal elections.  The ballot papers included the option ‘I don’t support anyone’.  The Sofia Globe’s editor clearly enjoyed penning his explainer: Doctor Fell.

The Czech Republic saw another massive (and orderly) anti-government demonstration in Prague, where our photograph was taken by Iva Zimova.  The BBC was there, too.

In Hungary, prime minister Viktor Orbán’s Fidesz took a knock when a pro-European, centre-left challenger ousted the Fidesz-backed incumbent as mayor of Budapest in local elections.  While in Poland a general election saw the Law & Justice Party retain majority control of parliament’s lower house, the Sejm, but lose control of the upper house, the Senate.  Poland’s voter turnout was the highest in three decades.  Politico has the Polish numbers.  The Guardian concludes that the results in Hungary and Poland  “give hope to [the] opposition.”

Romania got its fourth prime minister, Ludovic Orbán (no relation), in three years after a parliamentary vote; the Financial Times nailed it.  Romanians vote in the second round of presidential elections on November 24th: the incumbent, President Klaus Iohannis, won the first round and will face off against Viorica Dăncilă, whose Social Democrat government collapsed in a no confidence vote last month, enabling Mr Orbán to take the helm.  universal.net reports.

Slovakia’s parliament voted to extend the pre-election blackout on opinion polls from two weeks to 50 days.  The change comes four months before the next parliamentary election, scheduled for 29 February 2020.  This would be the third longest pre-election blackout in the world, after Tunisia’s 150-day and Cameroon’s 90-day blackouts.  Gothenburg University’s Juraj Medzihorsky explains.

And our Switzerland consultant grappled with the multiple-choices offered by the Swiss federal elections in election fever.